Brierley Twins At it again

RAMS HEAD SERVICE,  would like to congratulate the Brierley Twins on their latest achievements by these 2 brothers at the following rounds. 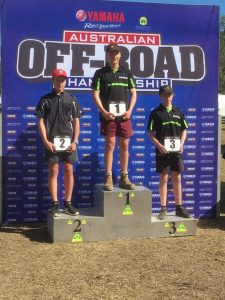 Sorry for another belated race report but between work, farm( where internet and phones don’t work!) and motorbikes i have just not got to it.

The weekend of the 13th August had both boys competing at the Australian Offroad Championships combined with NSW Off Road Championships at Monkerai near Dungog, NSW. The Dungog MCC had done the usual excellent job of running a well organised event with challenging tracks for all.

Saturday was a 2 hour cross country on a 9-10 minute loop through varying terrain. Both boys had a great race with Josh taking an early lead on the first lap and no one got near him as he and his KX250f powered ahead of the field. Josh took the overall junior win and 1st in the J3 class. Mitch also had a great battle ending the just over 2 hour race in 3rd position in the J3 class and 4th outright.

Sunday had the format change to a Sprint setup on a great loop ridden by the seniors the previous day. Both boys rode well and smart to stay at the pointy end of the field. Josh secured 2nd place in the J3 class and Mitch secured 4th place keeping valuable points for his championship lead.

Both boys are now training hard for the final rounds where Mitch hopes to bring home the J3 Australian Championship which he leads by 16 points. Josh will be working hard to take more round wins and show what he would have achieved without his injury in the first half of the year.

None of the boys success would be possible without the great support of so many great businesses, Family and friends. As usual the Kawasaki KX250f bikes were flawless in the tough conditions. The new Pirelli MX32Pro tyres had the bikes going forward with superior traction in the tough conditions and are definitely the new tyre of choice for us. We thank you all for your help and support and look forward to the final rounds of the Australian Off Road Championships in Penshurst, Victoria on the 10th & 11th September.